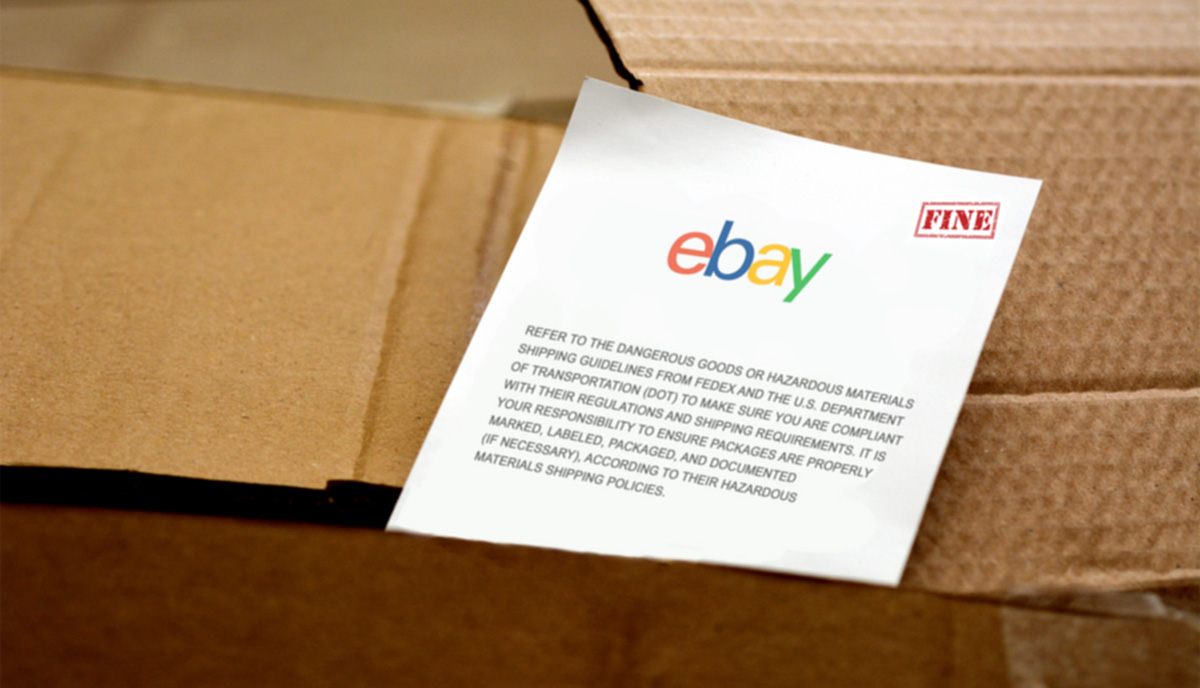 If you are like me, you may have received packages with online purchases containing lithium batteries or other Dangerous Goods/Hazardous Materials (DG/Hazmat) improperly prepared or even leaking their contents.  Finally, someone in the e-commerce community is putting their foot down to combat this problem.

In an article on their website released May 31, 2019, internet retail giant eBay announced that they will begin charging a $350 fee to its customers presenting non-compliant packages intended on being presented to FedEx for shipment.  They state that this new policy has gone into effect as of June 1, 2019.

The article states, “If FedEx determines that you have shipped a noncompliant package, this fee will be reflected on your monthly eBay invoice in the same way FedEx shipping charges are assessed today.”

In fact, e-Bay may be doing their customers a favor by charging this fee, because carriers such as FedEx, UPS and others, are required by US Department of Transportation (DOT) standards, found in the Code of Federal Regulations, Title 49 (49 CFR), to report Hazmat “discrepancies” if non-compliant shipments are discovered subsequent to acceptance, per 49 CFR 175.31 (b).

Moreover, per 49 CFR, 107.329 (a), a civil penalty can be levied up to $79,976 for each violation against a person who knowingly violates the Federal hazardous material transportation law, and up to $186,610 “if the violation results in death, serious illness, or severe injury to any person or substantial destruction of property.”  And if this is not attention-getting enough, 49 CFR 107.333 states that there are also criminal penalties if a person “willfully violates” the regulations of up to five years in prison – and up to ten years in the event that “the release of a hazardous material … results in death or bodily injury to any person.”

The eBay article goes on to reflect that, “A noncompliant package that contains Dangerous Goods or Hazardous Materials includes: insufficient or improper packaging, improper Hazmat labeling or markings, undeclared Dangerous Goods (DG), prohibited materials….”  Of course, there are other DOT requirements that shippers are responsible for such as proper documentation, and, most importantly, training all staff who affect the safety of DG/Hazmat shipments in commerce.

With this new e-Bay policy, it will be interesting to see if other e-commerce retailers adopt similar policies in the near future.  One thing for sure, the transportation system – and especially air travel – will be much safer if they do.

(a) Each person who discovers a discrepancy, as defined in paragraph (b) of this section, relative to the shipment of a hazardous material following its acceptance for transportation aboard an aircraft shall, as soon as practicable, notify the nearest FAA Regional or Field Security Office by telephone or electronically, and shall provide the following information:

(1) Name and telephone number of the person reporting the discrepancy

(2) Name of the aircraft operator.

(3) Specific location of the shipment concerned.

(6) Address of the shipper or person responsible for the discrepancy, if known, by the air carrier.

(a) A person who knowingly violates a requirement of the Federal hazardous material transportation law, an order issued thereunder, this subchapter, subchapter C of the chapter, or a special permit or approval issued under this subchapter applicable to the transportation of hazardous materials or the causing of them to be transported or shipped is liable for a civil penalty of not more than $79,976 for each violation, except the maximum civil penalty is $186,610 if the violation results in death, serious illness, or severe injury to any person or substantial destruction of property. There is no minimum civil penalty, except for a minimum civil penalty of $481 for violations relating to training. When the violation is a continuing one, each day of the violation constitutes a separate offense.

A person who knowingly violates §171.2(l) of this title or willfully or recklessly violates a requirement of the Federal hazardous material transportation law or a regulation, order, special permit, or approval issued thereunder shall be fined under title 18, United States Code, or imprisoned for not more than 5 years, or both, except the maximum amount of imprisonment shall be 10 years in any case in which the violation involves the release of a hazardous material which results in death or bodily injury to any person.